Origami, the Japanese art of paper folding, quickly became a very creative technique allowing the realization of many decorative objects. Although their creation seems too complex and requires a lot of effort and time, simpler models are available for beginners. And in this vein, the editorial will show you today how to make an easy Halloween origami by introducing you to the most popular motifs like spider, bat, pumpkin and so on. So, do not delay and plunge into the creative world of this traditional art by discovering our simple instructions.

Easy Halloween Origami: The Spider is one of the must-haves

If you think spider origami is hard to recreate, think again. Our first tutorial is the proof. But before turning to the point, it is important to clarify two terms specific to this Japanese art, which we will use through the article: fold valley (folding inward) and fold mountain (folding outwards). So, get yourself a sheet of paper Black and get to work by following the steps below as well as detailed images.

1. Begin by folding the paper following the red lines. You must make four folds in total.
2. Make a valley fold following the four lines.
3. Turn over the sheet of paper.
4. Make a valley fold on the red tips at the bottom right. Then make a mountain fold on the median lines. Finally, make the same fold to the two lines at the top left.
5. Pull the part indicated by the arrow (5th picture) upwards and fold over the red line.
6. Hold the same part between two fingers, as indicated by the large arrows, and flatten with the other hand (see the small arrow).
7. Fold on the two red lines like mountain.
8. Unfold what you have just folded.
9. Fold the edge indicated by the arrow on the red line.

10. Flatten the edges.
11. Fold the small triangle on the red line.
12. Perform steps 6-11 with the other unfolded pieces.
13. Pull the edges slightly in the direction of the arrows.
14. Fold the smallest triangle into the interior of the origami.
15. Press both ends together, following the instructions on the sixth picture.
16. Repeat steps 13 and 15 with the other three triangular pieces.
17. Slightly pull the pieces left and right upwards with a hollow fold.
18. Pull the rest of the top layer as shown in the last picture.

19. Make a valley fold above the red lines.
20. You have created an extra end. Fold it down by folding the valley on the red line.
21. Perform steps 17, 18, 19, and 20 with the remaining 3 pieces.
22. Your easy Halloween origami pattern now has 8 ends of which 4 are made up of more layers of paper. Carefully pull the corner indicated by the arrow (see the fourth picture) upwards by making a valley fold over the red dotted line.
23. Flattening as shown in the fifth picture.
24. Flip the model over and complete steps 22 and 23.
25. Press the edge indicated by the down arrow.
26. Fold the two upper ends together forming a valley fold.
27. Do the same with both ends.

28. Fold the next two ends in the same way.
29. Make a valley fold on the red line (see second image).
30. Make mountain folds on all eight legs of the spider by following the instruction on the third example.
31. Press both front legs down.

Bat origami is also one of the essential models for Halloween manual activities. Have fun immersing yourself in the creative world of this original Japanese art. Just follow the instructions in the following lines.

1. Obtain a sheet of square paper and lay it on the surface with the colored side down.
2. Fold the bottom tip to the top one to create a triangle.
3. Close the left corner to the right one.
4. Unfold.
5. Fold the lower part of the model upwards leaving a small triangular piece visible as shown in the example above.
6. Next, fold the small triangle as shown above and make a mountain fold on the red line.
7. Make a valley fold along the indicated line.
8. Repeat the last step on the back of the model.
9. Then, fold down the AC edge on the AB edge.

10. Make the final step on the back part of your easy Halloween origami.
11. Next, fold over the red line.
12. Repeat the last step on the back.
13. Finally, take corners D and E between your fingers and carefully unfold your bat origami.

And There you go ! You have just completed your easy Halloween origami. Gray paper was used for the realization of the bat above, but do not hesitate to opt for black, if you wish. However, if you have trouble following the steps shown in the pictures, please see the video below.

Pumpkin Origami Halloween: a fun idea that will appeal to children 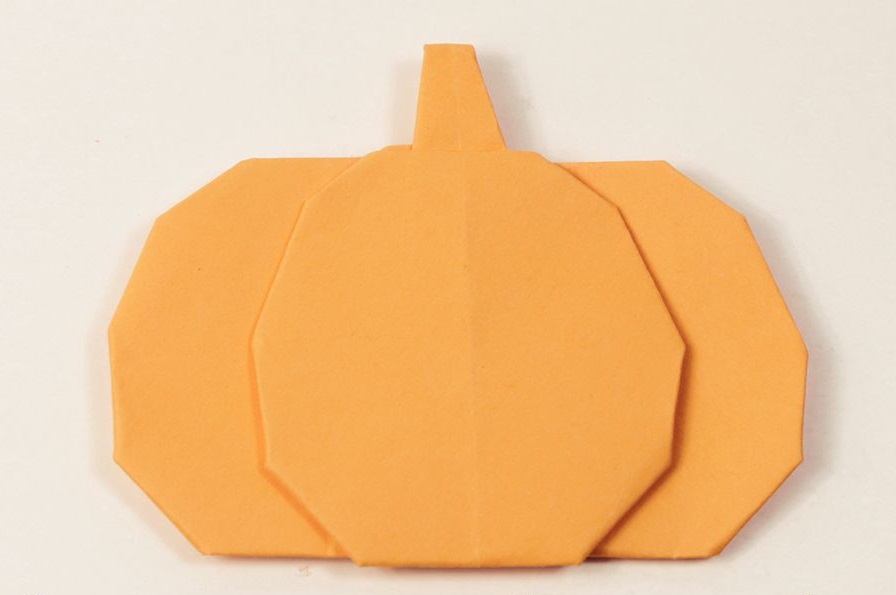 The following easy origami tutorial is devoted to another unmissable model of the Halloween party : his majesty, the pumpkin! If you think this pattern seems a bit difficult to recreate, think again! So, do not delay, arm yourself with three square sheets measuring 10 cm x 10 cm and glue and follow the instructions that follow.

1. Place the first sheet of paper on your work surface to create a diamond.
2. Fold in half and unfold.
3. Then, bend the left and right spikes toward the center as if creating a kite.

4. Fold the top corner down to create a triangle upside down.

5. Fold the bottom end leaving a little space at the top.
6. Bring the top left and right corners inward as shown in the example above.
7. Flip the origami Halloween easy, leave aside and, using the remaining paper sheets, create two more patterns following the instructions. 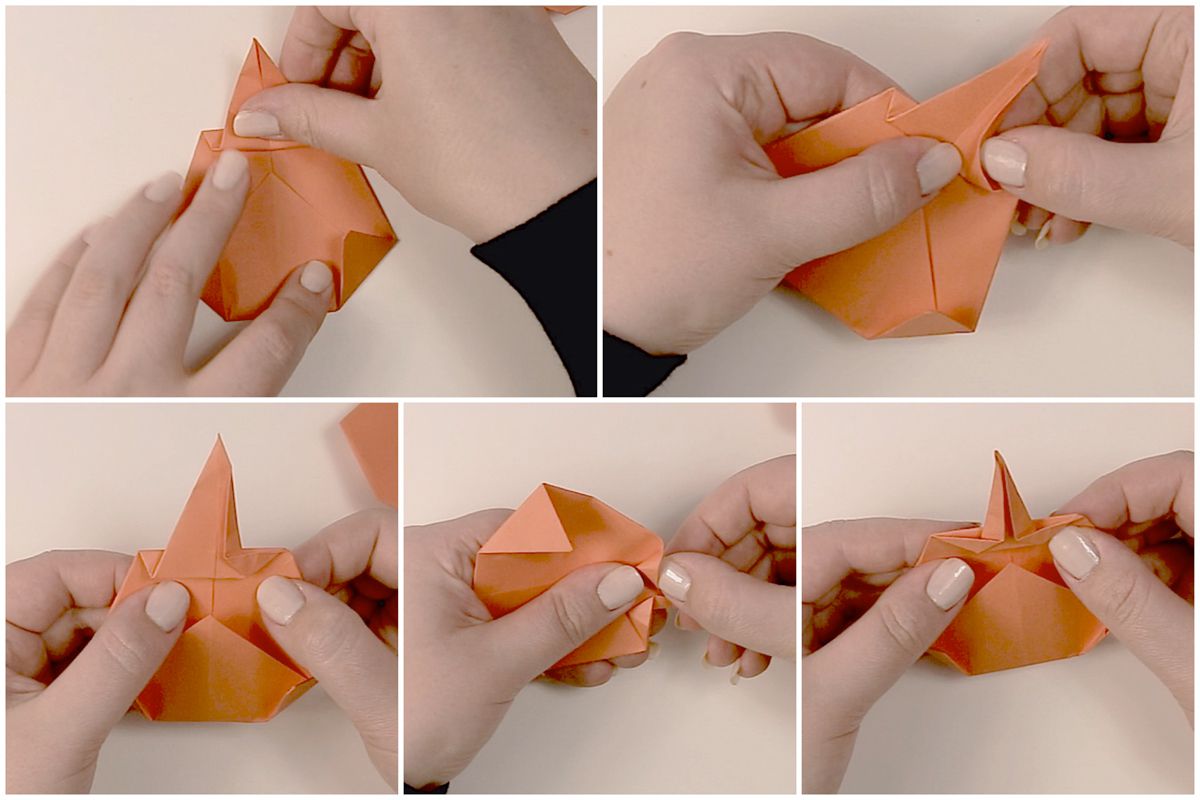 8. Take one of the models and fold the top triangle as shown above. In order to create a rod.
9. Then fold the two lower edges of the triangle upwards (see example above). The two folds do not have to be perfect. 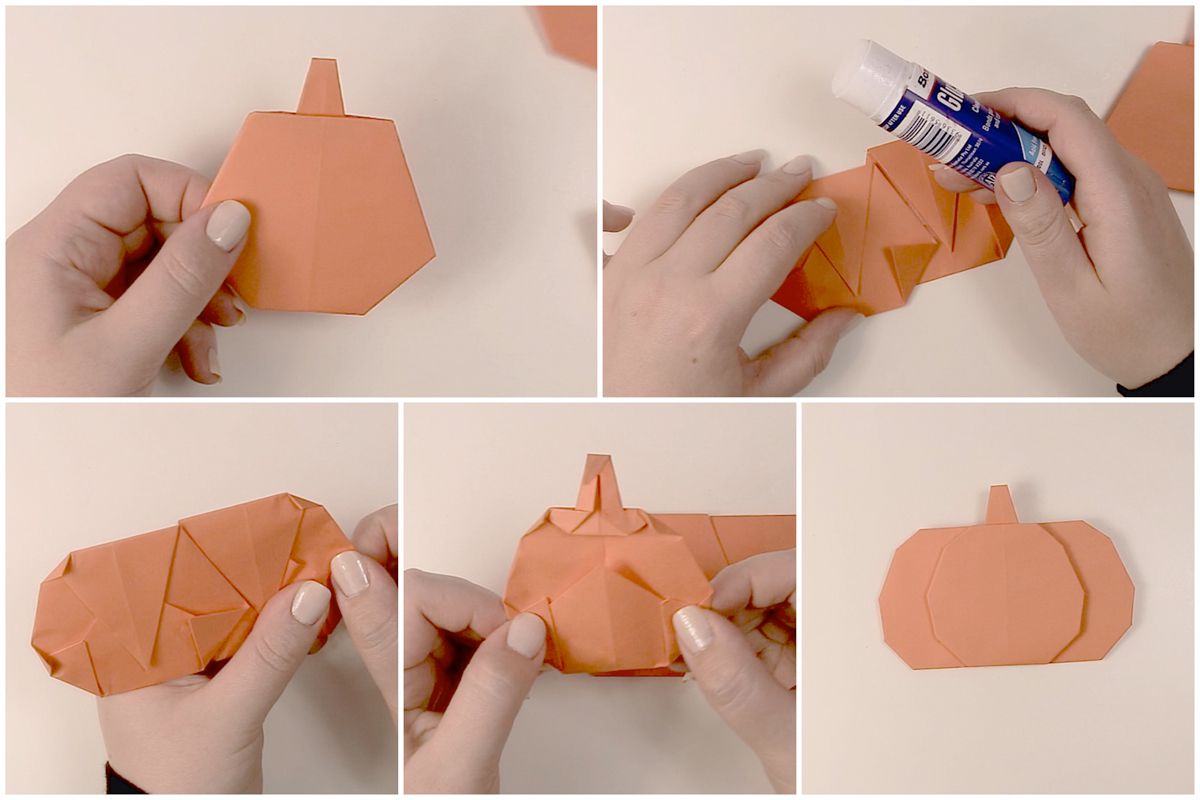 10. Glue together the three pumpkin patterns as shown above.
11. To give your Halloween origami a finishing touch, all you have to do is fold the ends to make an oval look.

Halloween Origami easy pumpkin way: a tutorial even simpler than the previous one!

Before moving on to the next pattern, we'll show you another Halloween pumpkin origami idea that is super easy to make. Get a sheet of square paper with the white side down. Fold diagonally. Make a diagonal fold again. 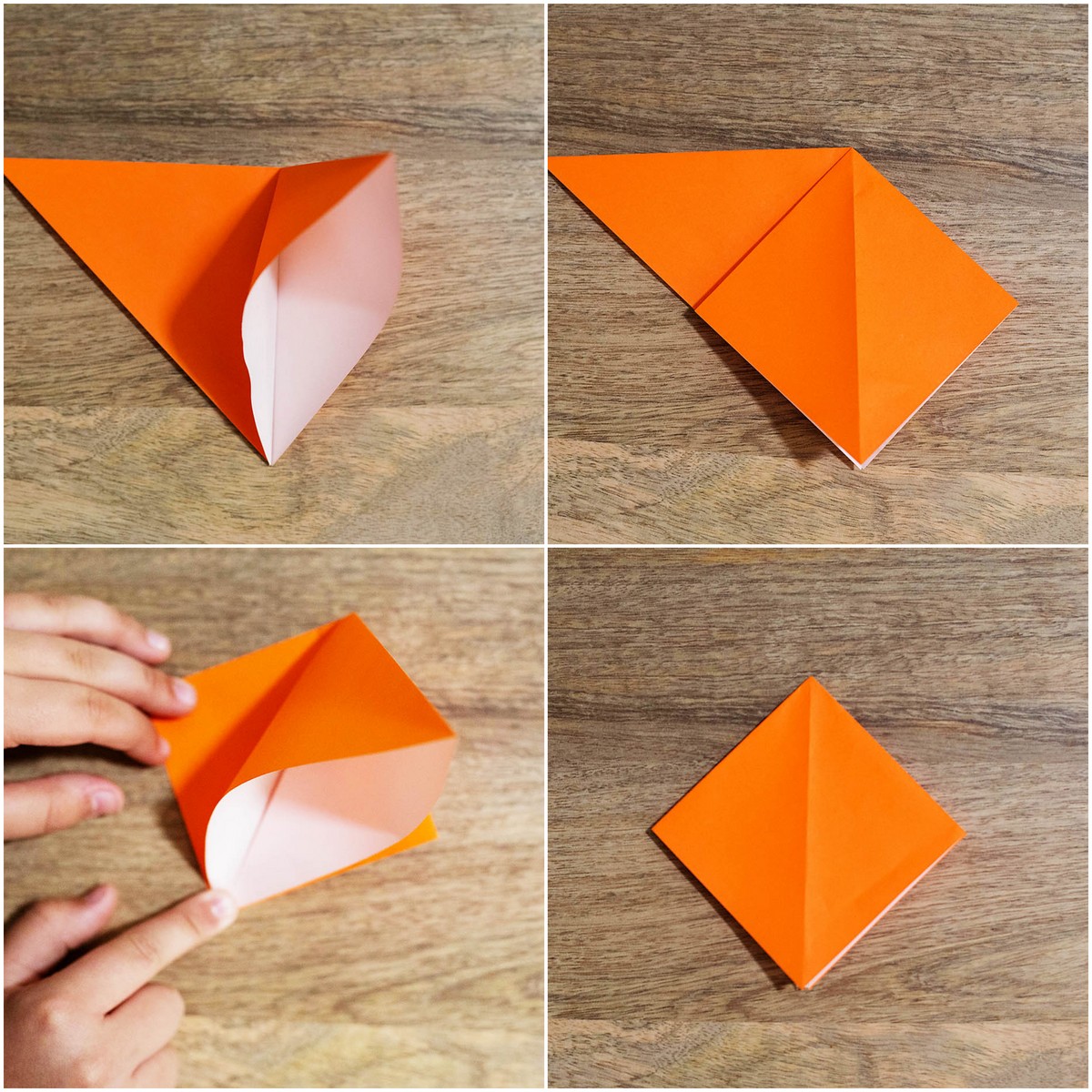 Then, open the right triangle and flatten as shown in the example above. Flip the model over and do the same.

Make valley folds by following the instructions on the pictures. Then, flip the model over and repeat the same step. Do not worry if the folds are not perfect. Fold the top tip outward.

Then fold the bottom tip outward. Do the same with the left and right sides to shape the pumpkin. Finally, draw the eyes, the nose and the mouth!

Halloween witch origami: a tutorial to succeed in no time

• Obtain white and black origami paper and lay the white side up as shown above. Fold in half (from left to right). Unfold.
• Fold the left and right edges towards the center line so that they line up.
• Fold the top layer back and to the side. Follow the dotted line above.
• Fold the lower part of the model up to create a fold connecting the left and right corners of the paper. Unfold.
• Fold the lower left side so that it aligns with the edge of the hat (join the blue dots).
• Depending on where you folded in Step 3, a piece of paper may extend a little beyond the witch hat. Fold a small section to hide it (see green circle).
• Repeat step 5 on the bottom right end (join the blue dots).
• Perform the last plus by following the instructions on the eighth picture to finish your Halloween origami easy witch hat way.
• Flip the model and that's it!